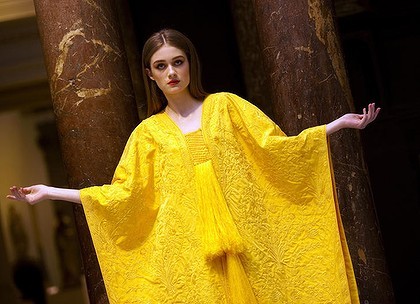 Madagascar, an island country located in the Indian Ocean is known for many things - its namesake super hit movies, beautiful beaches, amazing wildlife and . . . . . . . Golden Orb Weaver Spiders. While these arachnids are similar to the rest of their species, they have one unusual talent - Their silk shimmers like gold! 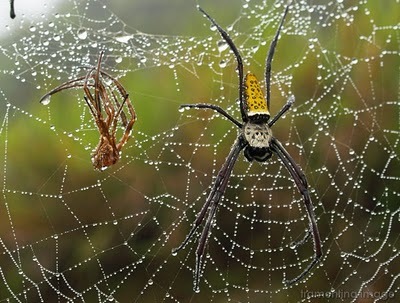 It is this shimmer that first attracted textile artist Simon Peers and fashion entrepreneur Nicholas Godley to these tiny, almost blind spiders, about eight years ago. The two decided to embark on an almost impossible project - Creating a textile from this golden silk, using old fashioned weaving techniques.

While collecting enough silk from any spider is an arduous process, accumulating it from the Golden Orb Weaver Spiders is even more so. That's because only females produce gold silk and they do it, only during the winter months. However, that did not seem to deter the two. 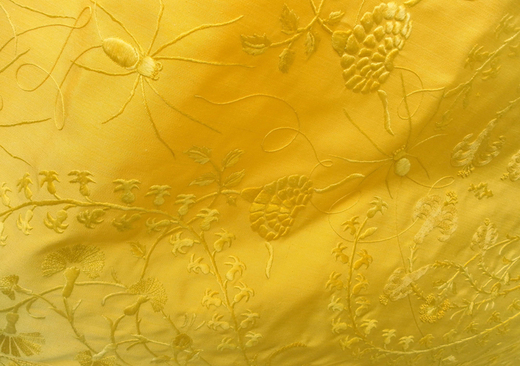 To collect the silk, a team of 80 locals scoured Madagascar's telephone phone wires each morning, looking for the special spiders. Using long sticks to draw them down, the locals would bring the spiders to the workshop. Once here, a hand powered machine was used to gently pull the silk strands, out of each creature's multiple spinnerets. Once the silk had been extracted, the insects were released back to their natural habitat - And, the process would begin all over, the next day.

Once enough silk had been collected it was twisted into individual threads by combining anywhere from 96 to 960 strands. Only then could the designer begin to weave the beautiful textiles.

In 2009, they revealed their first complete gold accessory - An exquisite 11ft. by 4ft. shawl. However, they were not done yet. Encouraged by their success, Mr. Godley and his partner embarked on an even more ambitious project - A full cape, embroidered with images of spiders, plants and flowers - A process that took over 6,000 hours to complete. 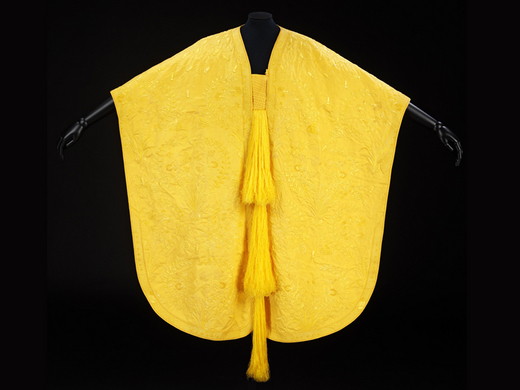 While the beautiful garment, which just went on display at London's Victoria and Albert Museum, is winning many design accolades, both Mr. Peers and Mr. Godley know that these are one-of-a-kind creations, that can never be mass produced. This unfortunately means that all of us will just have to be content admiring these beautiful masterpieces - Sigh! 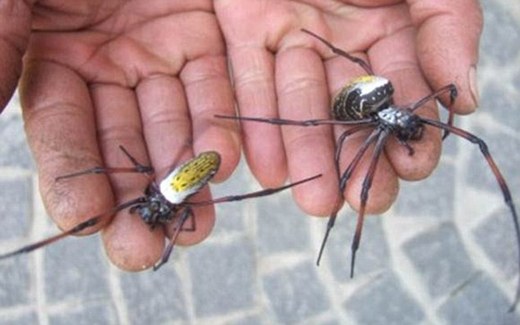 Golden Orb spiders are a member of the Nephila madagascariensis family, which are prevalent in tropical countries. The tiny creatures that are small enough to fit on the palm of a human hand, are almost blind, which means they have no idea of how beautiful their silk is. To catch their prey they rely on their sense of touch to feel the vibrations of any prey that gets caught in the web. The beautiful golden webs that can be found on telephone and electric wires are sometimes so big, that they stretch over entire roadways.