Those of you that have suffered from dry eyes, severe allergies or experienced an infection know how difficult it is to apply eye drops. The most annoying part is that even after you have managed to administer the medicine, most of it streams out with the first blink. In fact, that is the reason doctors always recommend multiple applications. Now, some researchers have come up with a stick-on nanowafer that will alleviate the aggravation and also help heal faster.

The clear disc-shaped medical device that is made from non-toxic polymer is similar to a contact lens except for one thing - it is twenty times thinner! The medicine that is stored in its several nano reservoirs gets dispensed gradually after the user 'sticks' it upon the surface of the affected eye. The best part is that the nanowafer doesn't pop out from the eye even upon repeated blinking and never has to be removed. It magically dissolves after the medicine is applied. 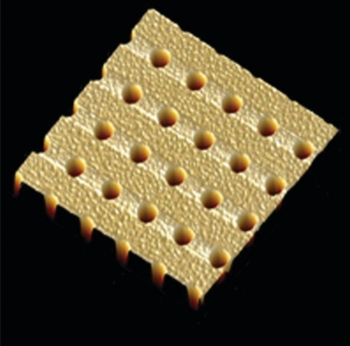 Though the nanowafers have not yet been tried on humans, they proved very effective in laboratory tests performed on mice. In the first trial, rodents suffering from eye infections were divided into two. One was treated with the antibiotics placed in the nanowafers while the other received traditional eye drops. The scientists found that unlike the eye drops, the nanowafer released the drug gradually over four hours allowing for better healing. Furthermore, they were able to find traces of the antibiotics in the eyes up to 24 hours later. In the case of the mice treated with eye drops, there was no sign of the medicine, minutes after they were administered.

In a second test, the researchers treated mice that were suffering from corneal burns. When the patients were examined after ten days of treatment, they found that the nanowafers were twice as effective in healing the wounds, with just half the medicine. That's because this technique allows a more efficient drug delivery.

Dr. Ghanashyam Acharya at the Baylor College of Medicine in Houston, Texas who led the research believes that in addition to accelerating healing, nanowafers may also help reduce some of the side effects, caused by multiple applications of topical eye drops. These include cellular damage, inflammation of the ocular surface and temporary blurring.

The researchers, who revealed their invention on January 13th in the journal ACS Nano now intend to test the nanowafers on people suffering from Cystinosis. The genetic disease causes crystals of cystine, an amino acid, to build up in the cornea. In order to dissolve them people afflicted with the condition are forced to apply eye drops hourly. Dr. Acharya hopes that the same results can be achieved using a wafer that needs to be inserted just once a day. It all goes well, the team will consider bringing the nanowafers to market within a year or two.