Seadragons may sound like mythical creatures from a fairy tale, but these tiny fish that are close cousins of seahorses and pipefish do exist. Found in the coastal waters off southern and western Australia, the gorgeous creatures that feed off tiny crustaceans, plankton, and larval fishes, do not have teeth or a stomach. They therefore, have to eat constantly and are always scouring the oceans in search of prey.

Until recently, scientists had believed that there were only two species of seadragons: Leafy, which sports large and flowing leaf-like protrusions on its body, and Weedy, that has much smaller leaf-like appendages. Turns out there is a third species - one scientists have decided to call Ruby, thanks to its stunning dark red color. The discovery of the newest member of the seadragon family whose scientific name is Phyllopteryx dewysea, is the result of a collaboration between Josefin Stiller and Greg Rouse from the Scripps Institute of Oceanography in San Diego, California, and Marine Biologist Narida Wilson of the Western Australia Museum (WAM). 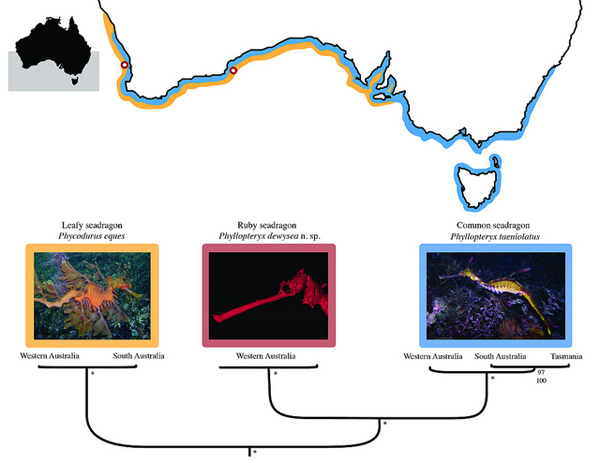 It all began when the Scripps scientists were analyzing seadragon tissue samples, provided by WAM as part of conservation research. They noticed that the ones from a seadragon found in 2007, had a DNA sequence that was different from the other test subjects. Curious to know why, the researchers requested the full specimen as well as photographs from when the creature was captured. Upon examining the images, they instantly knew that they had stumbled onto a new species. That's because this specimen sported a dark ruby-red color, that was very different from the orange tint of the Leafy seadragon or the yellow and purple hues of the Weedy seadragon.

Since the team only had the one preserved and no live specimens to work with, they decided to create a virtual model of the animal using 5,000 X-Ray slices from a CT scan. This enabled them to take a closer look at the seadragon and observe several features of the skeleton that were distinctly different from the other two species. This discovery along with the genetic evidence they had found previously, was enough to convince the scientists that they had indeed stumbled upon an entirely new seadragon species. 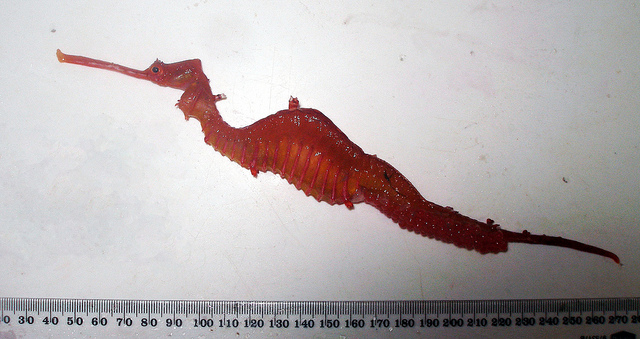 Of course, once the creature was identified, other preserved specimens were also discovered. Wilson unearthed one that had been lying in Western Australia Museum's collections for over a century, while Stiller found two more in the archive of the Australian National Fish Collection.

The challenge now is to locate a live specimen of this gorgeous creature that has been overlooked by researchers for so many years. However, that may not be easy. That's because these seadragons live at depths of 236-feet (72m), which is probably why scientists were unable to discover them until now. Also, their beautiful color provides the perfect camouflage in the deeper waters, which tend to be extremely dark. Wilson is not only looking forward to finding the Ruby seadragon but also other new species. The researcher says, "If we can overlook such a charismatic new species for so long, we definitely have many more exciting discoveries awaiting us in the oceans."