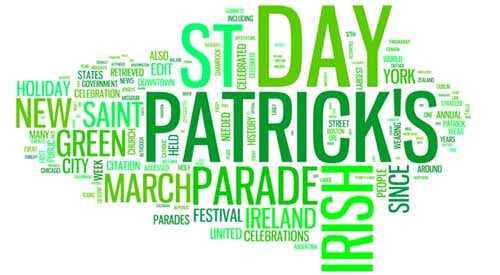 It's time to tuck away those black and blues that you have been donning all winter and get some green on! That's because Tuesday, March 17th is St. Patrick's Day, which means that those not sporting the color will have to endure painful pinches! Of course, this fun holiday is also about searching for four-leaf clovers and leprechauns that can lead you to gold. So how did the death anniversary of a once obscure saint who was not even Irish by birth, result in all these fun traditions? Read on.

Who Was Saint Patrick?

As you are probably aware, St. Patrick's Day is one of the most anticipated Irish holidays. What you probably don't know is that the man responsible for it was not Irish. According to folklore, Patrick was born somewhere along the West coast of Britain in 385 AD. He was kidnapped when he was 16 and sold to an Irish sheep farmer. The young boy escaped at the age of 22 and made his way back to Britain, where he spent 12 years in a monastery. In his mid-thirties, he decided to head back to Ireland this time, as a missionary. According to historians, Patrick died there on March 17th, 461 AD. Over the next few centuries tales of his achievements that included driving out the snakes of Ireland into the sea to their destruction, transformed him into a legendary figure. By the 7th century, Patrick was designated primary patron saint of Ireland.

Though green is now the color of choice, this was not the case in the 1780's when the Order of St. Patrick was established. Their preferred color was blue. In the 1790's green became tied to Irish nationalism and by the 19th and 20th centuries also associated with St. Patrick's Day.

As for 'pinching' people not wearing green? Nobody knows how that began. Some speculate that this American tradition stems from the fact that pinching results in a green bruise, while others attribute it to a myth that wearing green makes one invisible to leprechauns. They maintain that the pinch serves as a reminder to be careful of the wily creatures who can be dangerous.

What's With Corned Beef And Cabbage?

No St. Patrick's Day celebration is complete without corned beef and cabbage. However this is not an Irish tradition but an American one that began from early Irish settlers, who could afford meat only once a week. Since beef was cheap, it became the meat of choice. Over the years, this "special meal" became associated with the equally special St. Patrick's Day and the tradition was born. In Ireland, the preferred meat of choice is still bacon or lamb.

According to Irish mythology, the leprechaun, (whose name comes from the mixture of 'small person' and 'one shoemaker') is a tiny fairy that knows the location of a pot of gold. However to get to the treasure, one has to find, catch and even threaten the sneaky little guy. Though they have proved elusive, leprechauns are highly sought after every St. Patrick's Day.

As you may or may not know, President Obama's great-great-great grandfather was Irish! It is, therefore, no wonder that St. Patrick's Day is celebrated extensively at the White House. As has been a tradition for some years, Mr. Obama and Vice President Joe Biden will start the day by having breakfast with Irish Prime Minister Enda Kenny. Following that the two leaders will meet in the Oval Office for important discussions before heading over to a special reception that includes a Shamrock Ceremony. This entails the Irish Prime Minister presenting a Waterford crystal bowl filled with shamrocks to the U.S. President. The White House will of course also maintain the age-old tradition of coloring its iconic fountain, emerald green!