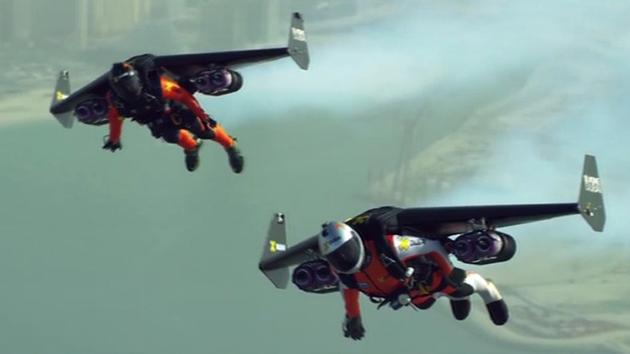 In the last 15 years, Yves Rossy has used his amazing jetpack wings to soar over the Grand Canyon, fly alongside an F-17 bomber and even circle Japan's Mt. Fuji. However, his latest flight in Dubai surpasses them all. That's because this time the adventurer joined forces with his protégé, 31-year-old skydiver and base jumper Vince Reffet, to do what no human has accomplished before - fly in formation!

The video that was released on May 11th, begins with the adventurers soaring over Dubai's beautiful desert dunes at average speeds of 200 k/h (124 m/h). While that is certainly mesmerizing, what is even more so is when the two explore the city's impressive skyline side by side, using perfectly synchronized body movements to steer themselves. 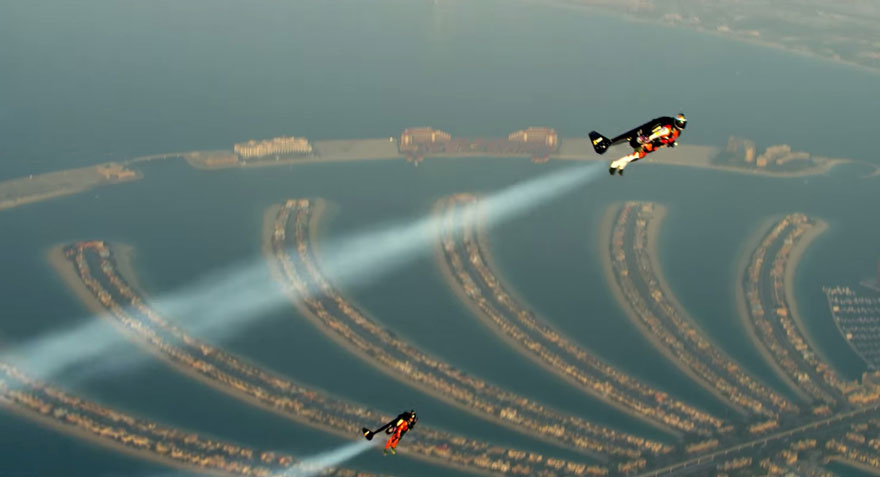 Rossy, a former fighter pilot, has been developing and refining his jet-propelled wings for over two decades. Over the years, he has created 15 different prototypes. The latest version which weighs 120-pounds is made from airplane-type carbon fiber and powered by four Jet-Cat P200 kerosene-burning engines, similar to those used in model airplanes. According to Rossy, they provide enough power to cover a flight distance of 50 kilometers. The wings, which fold at the hinges, open up as the wearer leaps off the plane from an altitude of 7,000 feet. The flier then has to uses his/her body and a hand throttle to maneuver the flight.

In addition to establishing a record, Reffet also walked away with another bragging right. He is only the second person in the world to have flown using Rossy's jetpack. However, that is about to change. That's because Rossy who recently moved his headquarters to Dubai, soon plans to share his amazing wings and flying skills with anyone that is interested in soaring the skies!