Lost Lake in Central Oregon is a mysterious natural wonder. During winter, it resembles any other large body of freshwater. However, as drier weather kicks in the water disappears, transforming the 85-acre 'Lake' into a beautiful meadow. It turns out that there is a logical answer to this magical phenomenon - a tube or tunnel created by an ancient lava flow that drains out the water.

Jude McHugh, a spokeswoman for the Willamette National Forest in Oregon, says that the lakebed starts to fill during the rainy season in fall. Because the lava tube measures just six-feet in diameter, it is unable to drain the water fast enough. As a result, the lake which is 167-ft at its deepest manages to remain full, despite the fact that some water is always seeping out. This continues through spring as the snow from the surrounding mountains melts. But once the steady flow of water stops, the constant drainage causes the lake to "disappear." 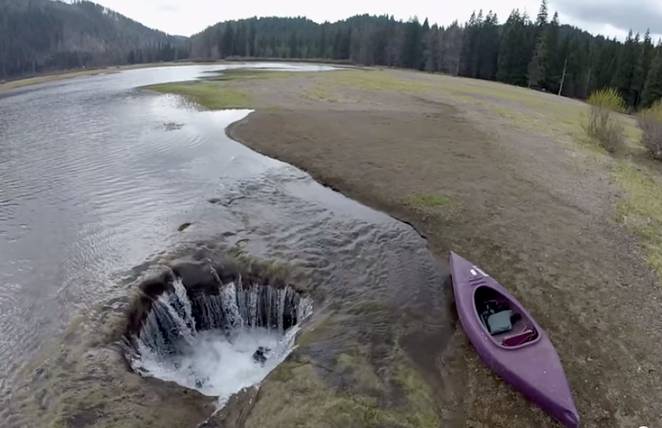 Experts are not entirely sure where the water goes. They hypothesize that it seeps through the porous volcanic rock below and eventually makes its way into Oregon's groundwater supply. Lava tubes are relatively common in Oregon due to the Cascade Mountain Range, a series of tall mountains and old volcanoes that cut through the state. However, none are as fascinating as the one on Lost Lake.

Lava tubes or tunnels form when lava flowing from several volcanic eruption channels merge into one large stream, similar to how a series of water streams and creeks amalgamate into a larger river. As the lava flows, some of the liquid rock overflows onto land and begins to cool. This cooling magma builds up solid walls on both sides of the flow. As the lava flow continues to flow, it erodes the ground creating an even deeper channel. Eventually, a crust forms on the top of the channel, forming a tube that remains long after the molten rock has stopped flowing.

Lava tubes vary in size. Some are only about a foot across while others are big enough for people to walk through. Not surprisingly, they are popular destinations for thrill-seekers. Some of the longest and deepest lava tubes can be found at the Hawaii Volcanoes National Park which is home to two active volcanoes: Kilauea, one the of world's most active volcanoes and Mauna Loa, the world's biggest subaerial volcano!

What would be some of the challenges faced by wild plants and animals...