It all began innocently enough. On Thursday, February 26th, 21-year-old Scottish singer Caitlin McNeil posed a simple question along with a photo of a dress on the social media website, Tumblr. It said, “Guys, please help me - is this dress white and gold, or blue and black?”

Little did she know that this simple query would ignite an Internet firestorm! As the photo began to circulate across various social media sites, the dress became the center of a worldwide debate. Some firmly believed it was blue and black while others clearly saw it as white and gold. So who was right and why did millions of people see colors that were so far from reality? Read on.

To understand why there was such a disparity in opinion, we first need to learn how the human brain interprets images. For us to be able to see, light rays from the object pass through the lens of our eyes and hit the retina situated in the rear of the eyeball. The retina reacts with the different wavelengths and transmits the signals to the brain's visual cortex. It is here that the signals are interpreted and transformed into images that we can comprehend.

However, it is not as straightforward as it sounds. That's because the initial rays of light from an object also include what we call illuminating light - rays emanated by the natural surroundings around the object we are trying to view. For example, early morning sunlight causes our eyes to see variations of pink or red. However, our brain has been trained such that it eliminates the extra colors, allowing us to see the actual color of the object. While this process is usually extremely efficient, in some cases the brain gets a little confused, resulting in what we call optical illusions. That is precisely what is going on with this dress.

According to experts, the confusion over the colors of the dress has to do with the way the image is taken. People see the dress differently because of their sensitivity to the blue background lighting in the photo. For example, while the squares labeled "A" and "B" in the picture above are the same shade of gray, it is not apparent to the human eye. That's because our brain makes assumptions based on the light around the square. In this case, it concludes that since "B" is under a shadow, it must be a lighter shade of gray.

The dress is creating a similar optical illusion. According to David Williams, Professor of Medical Optics and director of the Center for Visual Science, the controversy is the result of the confusing lighting around the dress. He thinks that it is not giving the brain the usual clues on how to interpret its colors.

As a consequence, people that perceive the background as brightly illuminated conclude that the dress is made of a darker material, and see it as blue and black. However, others see a poorly lit setting. This causes their brains to imagine a dress that is reflecting lots of light and, therefore, "see" white and gold. The problem is once they see it one way; it is hard for them to convince the brain otherwise.

According to James Pomerantz, a professor of psychology at Rice University and a visual perception expert, “The main point is that we can’t tell the difference between white and blue, or black and gold unless we have some independent information about the wavelengths of light illuminating the dress.” It is this lack of knowledge that has resulted in what is probably the most hotly debated issue of recent times. 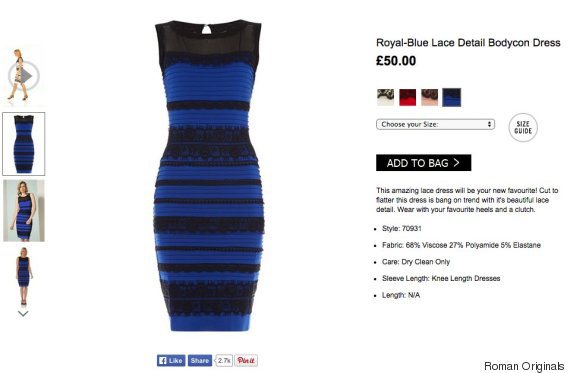 As for the true colors of the dress? Roman Originals, the manufacturer, confirms that it is indeed blue with black lace. Unfortunately, since the dress sold out within minutes after the photo became famous, those that still are unable to see the true colors will have to take their word for it.