The idea of riding a bike almost 4,000 miles across the country seems like an impossible task for most, but not for Elizabeth Case and Rachel Woods-Robinson. That's because these young scientists have a mission. They want to educate middle school students about physics and renewable energy and also encourage young girls to pursue careers in science.

Rachel and Elizabeth met at UCLA where they both studied physics. Upon graduating, Rachel began work as a researcher at the Lawrence Berkeley National Lab while Elizabeth became a journalist for Davis Enterprise, a small newspaper based in Yolo County, California. In addition to being passionate about science and sustainability, the two also share a penchant for cycling.

Cycle for Science combines these two interests. As the young women pedal their way across 15 States, from San Francisco all the way to New York, they plan to stop at ten schools and summer programs and teach kids about cutting edge science concepts. What's cool is that the science "lessons" are not boring textbook curriculum but fun hands-on learning most of which are centered around a miniature solar-powered bicycle that the two are currently designing. 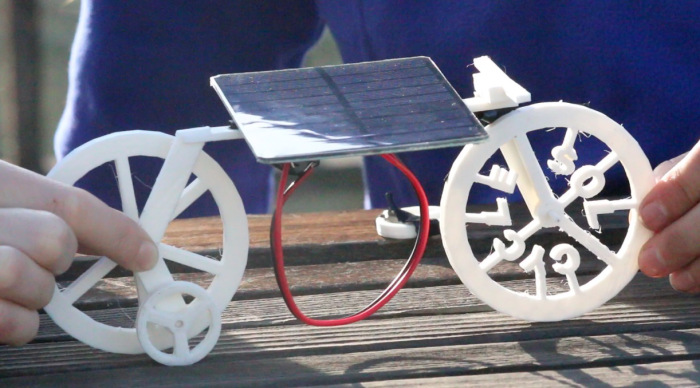 Called Sol Cycle, the tiny two-wheeler has been manufactured using a 3-D printer. In addition to sharing their concept with students, the two also plan to release the design files online, so that anyone with access to a 3D printer can "manufacture" their copy. In addition, Rachel and Elizabeth are also working with local education groups to create lesson plans around next generation science standards like conservation of energy and engineering design.

Though neither are educators, the young women are no strangers to teaching others about scientific concepts and sustainability. While in college, Rachel organized Ecochella, a 'green' concert with a sound system that was powered entirely by a bicycle-powered generator that she designed. Her initiative has inspired an annual engineering competition where student teams vie against each other to create unique sustainable generators to power Ecochella every year. Elizabeth and Rachel have also spent an extensive amount of time volunteering in classrooms and tutoring kids.

In addition to teaching children about sustainable energy, the two also hope to inspire girls to pursue science and engineering degrees. And what better role models than these young women who did not enter school thinking they would be scientists. Rachel was hoping to pursue a career in music while Elizabeth thought she wanted to study English.

However, their curiosity about physics led both to enroll in a one-unit seminar on the "The Arrow of Time" as freshmen, and the rest, as they say, is history. The best part is the physics majors are so hooked to science that they both plan to pursue further education in the field. This fall, Elizabeth will head back to college for a graduate degree in Engineering while Rachel plans to apply for her Ph.D. in 2016.

In addition to inspiring young kids, Rachel and Elizabeth, who embark on their three-month cross-country journey on April 17th, also plan to interview science teachers. They envision creating a lesson plan database from their conversations and sharing them with the world through their website cycleforscience.org. The cyclists believe that this will result in a comprehensive roadmap about what science education looks like across the country.