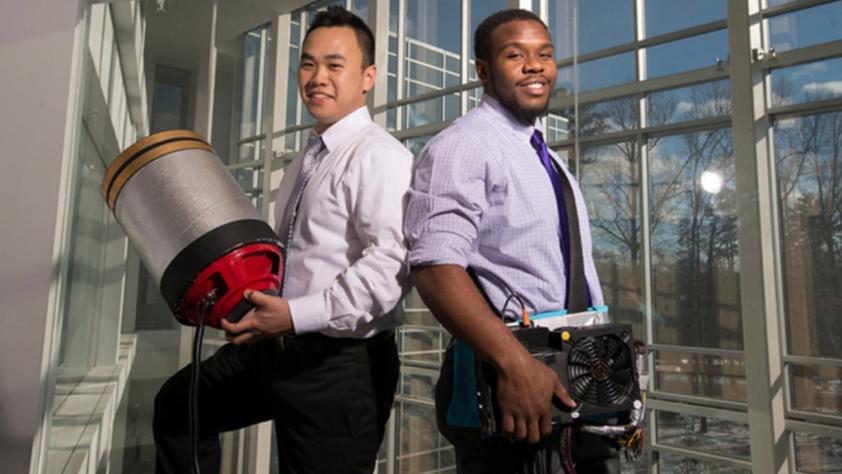 Water, foam, sand, blankets, and even baking soda are well-known solutions to putting out flames. But sound waves? That has to be a first. But that is exactly what two young engineers from George Mason University are using to douse small fires.

Electrical and computer engineering students Viet Tran and Seth Robertson were looking for an interesting idea for their senior research project. That's when they stumbled upon an experiment conducted by the Defense Advanced Research Projects Agency (DARPA ) in 2012. Called "acoustic suppression of flame" it was abandoned after the agency was unable to determine its effectiveness on a large scale. 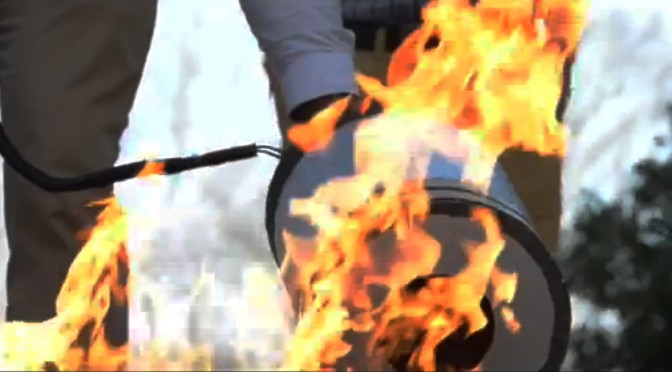 Tran and Robertson decided to challenge themselves and see if they could take the research to the next level and build a fire extinguisher that could be used commercially. As with any radical idea, they faced a lot of skepticism even from faculty members many of whom declined to serve as advisors. After all, neither of the students were chemical engineers so what could they possibly know about creating a fire extinguisher? The students were finally able to convince Professor Brian Mark who agreed to oversee the project and not fail them, if they were unable to make the concept work.

The young engineers first tried to extinguish the fire by placing a subwoofer near a flame created using rubbing alcohol. But they soon realized that 'music' is not such a good idea since it is inconsistent and unpredictable. The next option was exposing the fire to 20,000 to 30,000 hertz frequencies. However with the high frequencies, the flames only vibrated. The duo hit a home run when they reduced the frequency to about 30 to 60 hertz. Turns out that at these low frequencies, the sound vibrates the oxygen away from the flames. With no fuel to keep them going, the fire suffocates and dies. 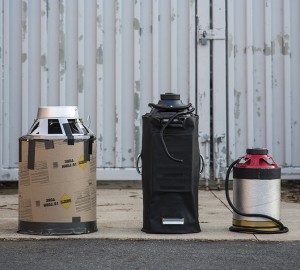 The 20 lbs prototype that looks like an antique milk can is connected to a well-ventilated amp. A bass speaker fixed above the barrel amplifies and directs the sound waves. While it can currently put out only small alcohol-fueled fires, the students hope to make it work for other flammable chemicals as well. Also, although Tran and Robertson had initially envisioned the handheld extinguisher to be for home or space use, they now believe it could even work for larger fires. A local fire department has already shown interest in testing the extinguisher on a structure fire, in the hopes of replacing toxic and messy chemicals with clean sound waves!

Though the young students appear to have convinced many of the initial skeptics, Kenneth E Isman, a clinical professor at the University of Maryland's fire-protection engineering department, is not amongst them. He believes that while the extinguisher may be good enough to put out small pan fires, it will not be able to deal with larger domestic fires. He is also concerned that the sound waves do not cool the flames down. This means that the minute they get exposed to oxygen they could easily rekindle. 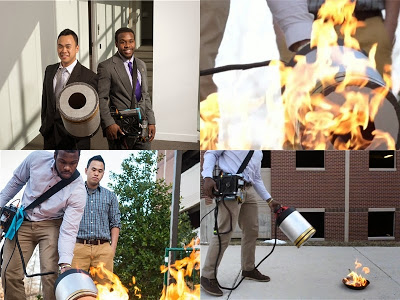 However, Tran and Robertson are not letting naysayers stray them from their goal. They are forging ahead with their idea, this time with the full support of the University who is even helping them apply for a provisional patent. If they do succeed, there may be soon be a time when fire trucks will be extinguishing flames with some sweet music, instead of messy toxic chemicals!