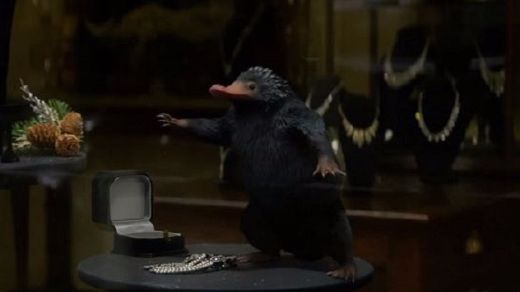 If you thought the captivating creatures in the movie adaptation of J.K. Rowling’s Fantastic Beasts and Where to Find Them, looked and acted somewhat familiar, you are not wrong. That’s because to create the mythical creatures, animators from three visual effects companies, Framestore, Rodeo FX, and MPC, drew inspiration from real-life animal physiology and behavior.

The artists, who worked in teams to bring Rowling’s vivid imagination to life, began by creating a framework – a digital depiction of the skeleton and muscular systems that would allow for fluid, realistic movement. Only when they were completely satisfied with the way the creature was moving would the artists add finer details, like shape and placement of eyes, teeth and claws, and outer coverings, like skin and fur.

This was no easy task given that, in many cases, the fantastic beasts were amalgamations of several real-life animals. For example, take the mooncalf. The four-legged creature’s otter-inspired body was attached to a long giraffe-like neck. While imagining it may have been easy, ensuring that the different muscles were coordinated and worked seamlessly together was hard.

One of the biggest challenges the Rodeo FX team faced came from the nundu, which made a brief appearance in the movie. Animating its lion-inspired body was relatively easy. However, given that the beast’s breath had the ability to cause devastating diseases, it was important that its pufferfish-like spiny skin texture, especially the throat pouch, inflated realistically when the animal roared.

But the attention to detail did not stop with the muscle movements. Everything, right down to the creature’s fur or hair, has to flow naturally as well. This was especially true for the demiguise — the ape-like beast whose silky silver hair could be used to make invisibility cloaks. To ensure that each strand moved as it would in the real-world, animators from MPC used technology that allowed them to “groom” the hair, using strands of simulated cloth.

Equally challenging was the occamy, a beautiful bird with a snake-like body. Since one version was not able to capture all its movements, MPC digital artists had to create five animations to represent the remarkable creature, which could grow or shrink to fit its habitat.

While the painstaking detail applied to every mythical creature regardless of its role in the film, may appear excessive, it is the one of the reason fans continue to be drawn to J. K. Rowling’s magical world.

WeekMonthYear
1.
Cereal-Loving Rescue Cat Gets A Custom Delivery Of Fruity Pebbles30.7k reads
2.
This Year's Largest And Fastest Asteroid Is About To Zoom Past Earth26.7k reads
3.
How Texans Stepped Up To Help One Another During The Brutal Freeze15.1k reads
4.
NASA's Perseverance Rover Successfully Lands On The Red Planet14.7k reads
5.
Six Skeletons Discovered Inside Ancient Shipwreck Helmed By Legendary Pirate Samuel Bellamy14.3k reads
Sign in or Sign Up
for unlimited access to Assignments
Name:
Date: