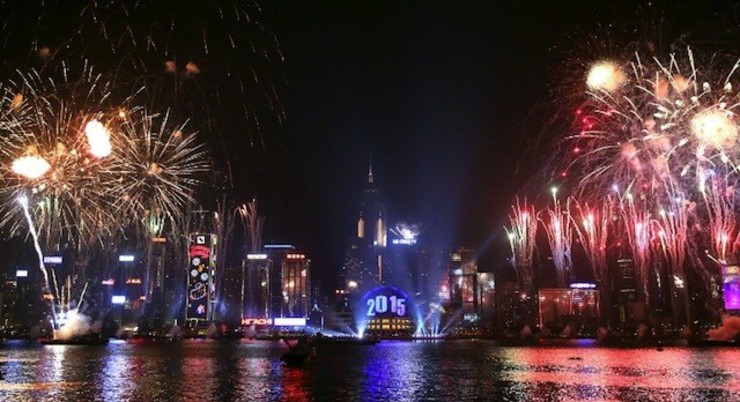 Happy 2015! As is the tradition, at the stroke of midnight on December 31st, 2014, cities all around the world welcomed the new year with elaborate fireworks. Though you may have seen the ones where you reside, chances are you missed some of the other spectacular displays that took place globally. So settle down with a cup of hot cocoa and enjoy the show!

Thanks to its location, Sydney is always amongst the first major cities to welcome the new year. Though the officials always put up a great show, this year's display that began at midnight with a light bulb to symbolize inspiration, was simply spectacular. What was even cooler is that for the first time ever, three drone-mounted cameras, captured aerial footage of the fireworks. Over 1.5 million revelers lined up around the city's famous harbor to watch the 12-minute display that cost $750,000 USD. The show was also broadcast to a billion people worldwide.

Rio de Janeiro's beautiful Copacabana beach, a familiar sight during the 2014 World Cup, was the venue for the city's New Year celebrations. The annual event attracted over a million tourists and locals who were dressed in white, a Brazilian New Year's tradition that signals purification and a peaceful year.

In Hong Kong, the residents that had gathered around the city's popular Victoria Harbor were treated to a spectacular eight minute show that included a light sprinkling of artificial snow.

Over 100,000 people lined up along London's Thames River to begin 2015 with a bang caused by the explosion of 12,000 fireworks that weighed a hefty 15 tons. The $2.8 million USD, 11-minute display that included bursts of red fireworks representing poppies to commemorate the 100th anniversary of the First World War, was accompanied by an electronic soundtrack.

As is the case every year, over a million people from all over the world crammed into New York's Times Square to witness the famous ball drop along with a ton of confetti and the stunning fireworks display that followed. The visitors that had arrived early in the day to get a glimpse of the shimmering orb featuring 2,688 Waterford Crystal triangles, were entertained by performances from stars like Idina Menzel, Magic and Taylor Swift.

Cities across the nation mimicked the 108-year-old ball drop tradition with their own special twists. For the residents of Las Cruces, New Mexico, it was a big chili, while the "home of country music", Nashville, Tennessee, began 2015 by dropping a musical note. Then there was the wedge of cheese in Plymouth, Wisconsin, the oversized spurred cowboy boot in Prescott, Arizona and the most bizarre of all, a replica of a pasty, a baked pastry stuffed with meat and potatoes, in Michigan's Upper Peninsula!

The tiny desert city of Dubai is known for dreaming big. It already boasts the world's tallest towers, largest man-made island and since 2014, the biggest fireworks display! This year, the city added another feather in its cap, by lighting up the Burj Khalifa with 70,000 LED panels and claiming the record for the world's largest LED-illuminated facade.

Did you do anything special to welcome 2015? Be sure to let us know, by adding your comments below.